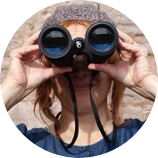 Juliet draws on the local landscape and the everyday in her poetry. Taking a lead from small events and ordinary details, she builds up pictures using story and language to communicate common experience.

She is interested in collaboration and has been lucky to be part of the Beneath the Beacon project working with a puppet-maker, archivists, and songwriters and musicians.

She is currently working with artist Phil Hewitson to illustrate a group of poems. A sample is included here.

On the crag, in old boots and double socks,
we search for meaning. Pushing blind toes
into cracks, we loosen cushions of moss
that bounce off behind us. False dawns end
with skittish sheep startled by my bobble-hat
and our chatter. Hands on hips, we stand
for the view and discuss the possibility of God
and why this landscape is beautiful.
For the descent, an easier route takes us
quickly back to the Pay and Display. Turning
the Fiat keys in my pocket, I realise my hat
is still on the cairn where we talked about God.

You could walk upon
the backs of boats and submarines
that filled the loch from side to side, its full length.
Russians still come with wreaths and thanks for the food
and munitions sent in the Arctic Convoys.

We argue, it’s cold. I want a picture by the memorial, you want
lunch. I nit-pick, annoyed with the unflattering photo
and you lose it, saying we must never do this again
and that you’d rather be at work
than on holiday.

There you are, a foot either side
Of the white line, arms outstretched
In the middle of the road. Offering
Yourself to the cars, not as a soft target
But as a challenge. ‘Come on then’
You shout from the totem of yourself
That is fizzing and crackling
With the electricity of rage.

The traffic parts,
Picking out your pink trench coat easily
With their headlights. You remain fixed
In the road, a terrifying Medusa
Drawing static from the night sky.
The cars keep swerving as you rave
At their windscreens, until
In a heart-beat, you jump the barrier
And sit on the verge laughing.

You play Russian roulette along the lanes,
spinning the steering wheel at each bend.
I throw my lot in with you again, map
in the back, feet on the dash.

After all these years, you sprint
up the steps to the stones, pointing
both left and right, gabbling about
earthworks, the henge, the village.

Faces, noses, teeth welcome us, telling
of a language, too big to write down.
We join arms around a ten-foot molar,
full of joy at its size. A red lorry passes

On the way to Exeter, traffic continuously
Rumbles through the ring. At the knarled trees,
We laugh at plastic ribbons suffocating
Their branches. I photograph the maze

Of oak roots before we move on.
Turning off the car radio, we pull-up
In front of Silbury Hill, the noise of our morning
Slides away. Avebury ring seems to shrink

In the face of this ground-giant.
A gressed ziggurat; flat-topped, improbable,
Dominating the A4. We stare at it, chins
On palms, puzzled by the effect it has on us.